Click on a book cover for information, reviews, and more on Amazon.com!

Libby huddled alone because the other squirrels thought her different, odd. She was white while they were “normal” gray squirrels. Even in the worst winter, she couldn’t join them for warmth or share food. What was a scared, lonely little squirrel to do?

5-Star Amazon Review: “Libby is excluded because of her differences…has a great message for children who feel different from their peers…” I DON’T WANT A HAIRCUT

A little boy’s imagination goes wild during his first salon haircut. Even with comforting words by his stylist, little Harry imagines bees buzzing around his ears, a giant pulling on his ears, and even spaceships landing on his head. But Harry gets a surprise when he looks in the mirror. 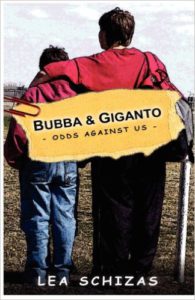 BUBBA AND GIGANTO: ODDS AGAINST US

He hates his name, Bubba, because it gives bullies an excuse to pick on him, especially when he starts at a new school. So what does Bubba do the first day he steps off the bus? Bumps into the biggest kid there. However, instead of slugging the new comer, Giganto,as Bubba calls David, becomes his friend. Are they ever different: quiet, non-confrontational Giganto and tough with a temper Bubba. But David has a secret–a dangerous secret. Bullying Giganto seems the norm at school, ’til Bubba steps in. After some exchanges of words between the bullies and Bubba and a soccer challenge, Giganto’s deadly secret will be revealed.

5-Star Review: “Bubba & Giganto is an insightful look at the potential dangers of bullying and the foolishness of keeping important secrets from your friends. As a mom of two teenage boys, I recommend this book for ages 12-15.“

Jillian is planning her first big Halloween party and hopes the weather holds out.

Well, the weather does…but after Jillian, in her witch’s outfit playfully chants the following from a prop witch’s spell book:

Not many but a few

To meet your history

And see it’s not misery

For you will now travel

In a land full of marvel.”

everyone is in for the surprise of their life. Her backyard is gone. In its place greenery filled with tall trees, a variety of bushes, and…DINOSAURS?

5-Star Review: “This is a great book. The story flows very well and middle graders will easily relate to it. I love the change through time that teaches about dinosaurs without sounding like a lecture. Very enjoyable. Lea Schizas is definitely a voice for this age group for school and home.“

A lifelong sanctuary of home bliss suddenly comes to a halt when Alexandra Stone discovers her parents lied and kept secrets about their family heritage. The discovery comes after a silly chant transports Alex and her best friend Sarah, along with her two pets, to the outskirts of Rock Kingdom.

Now faced with the dangerous elements of Dread’s Forest, Alex is determined to fight the man responsible for their predicament – her uncle.

But is he responsible?

She will risk her safety and trust her instincts when thrust alongside him to battle the Braks, skeletal creatures that project thorn-infested slime encasing their victim before plunging them deep within the caverns of the earth.

Readers will discover that ‘‘things are not always as they appear to be’.

The Rock of Realm will shatter the concept of ‘villain’.

Reader Review: “Rock of Realm, with funny moments, is tense and exciting. The story reminded me of a modern day `Famous Five’ by Enid Blyton, only better. I loved it. I recommend this novel to the young and the young-at-heart.“

Mommy of 5...living her dream...helping writers by "menditing" them: Mentoring & Editing.

30% OFF: use code LAUNCH2020 in your TeeZING Designs cart